Great Ones, it’s close to Fed Day … and something evil’s lurking in the dark.

Under Jerome Powell, the interest rates have almost stopped your heart.

You try to scream, but inflation takes the cash before you make it.

You start to freeze … a market crash looks you right between the eyes. You’re paralyzed!

Umm, aren’t you going to save us from the beast about to strike?

I wish I could, Great Ones, but you heard the door slam … there’s practically nowhere left to run.

Growth stocks have felt the cold hand and wonder if they’ll ever see the sun. I mean, you can’t just close your eyes and hope that this is just imagination.

‘Cause all the while, the Federal Open Market Committee (FOMC) is creepin’ up behind. We’re outta time!

But what about the Fed pivot! PIVOT!

Yes, there are rumors that the Federal Reserve is about to pivot in its thrilling interest rate hike quest. And if we’re lucky, we just might hear Federal Reserve Chairman Jerome Powell hint at such a pivot this Wednesday afternoon.

If we’re lucky, you say?

Yup. Here’s the deal: Remember way, way back in March when the FOMC said its target interest rate was 3%? Well, that target changed pretty quickly after inflation continued to rise despite an initial round of 75 basis-point interest rate hikes. The Fed has since signaled a target rate of 4.5% to 4.75%.

That shift in policy sent Wall Street tumbling sharply. Remember, Wall Street doesn’t like change or uncertainty … and the Federal Reserve provided both with that abrupt policy shift.

The last thing Jerome Powell needs right now is a repeat of this debacle.

The Fed is already barreling toward higher unemployment and an official recession designation for the U.S. economy. It doesn’t need a collapsing stock market on top of all that.

For instance, let’s say the Fed does come out and announce an official slowdown in interest rate hikes. Wall Street loves the idea and rallies hard.

But what happens if Friday’s jobs numbers and subsequent U.S. economic data indicate that inflation is still rising sharply?

After all, there is a lot of economic data on tap before the Fed’s next meeting in December. Anything can happen between now and then.

Does Powell risk sending a positive message now, only to be forced to backtrack again later this year?

That would be disastrous for the markets.

If you pre-commit and the data slaps you in the head — then you can’t follow through.

So while we just might hear some inkling of a pivot in monetary policy, don’t expect anything definite. I’m calling it now: We’re getting yet another 75 basis-point interest rate hike and a whole lot of very, very cautiously worded rhetoric this Wednesday.

And if there isn’t enough hope for a turnaround or enough “pivot” language, we’re likely getting another sell-off. Why? Because Wall Street has already gotten its hopes up for a Fed Pivot Party.

The answer to the question of what either forces or allows the Fed to stop is probably not going to come from the data. The answer is going to be that the Fed has a number in mind to pause.

[The Fed] is careening toward this moment of truth where it has very tight labor markets and very high inflation, and the Fed is going to come out and say, “OK, we’re ready to pause here.” That strikes me that is going to be a very volatile period for the market.

Note that while Stanley clearly thinks it’s a bad idea for the Fed to pre-commit to a pivot on interest rate hikes if it can’t follow through, he also believes that the Fed will pause rate hikes anyway. And if U.S. economic data continues to signal rising inflation after the pause, look out below…

Darkness falls across the land, a market collapse is close at hand. Investors crawl in search of gains, to terrorize y’all’s investment games.

And whosoever shall be found unprepared for going down must stand and face the Fed-made hell and rot inside a 401k shell.

And though you fight for yield to survive, your portfolio starts to shiver. For no mere investor can survive the evil of the Fed’s pivot point thriller!

But Great Stuff, what about dividend investors? Aren’t dividends a kind of yield? Where’s my great dividend pumpkin, Linus?!

He’ll send you the entire list for FREE! And I mean it — no strings attached.

Click here to get all the details now … before this FREE offer expires!

See? Who says you can’t have your king-sized Twix bar and eat it too? 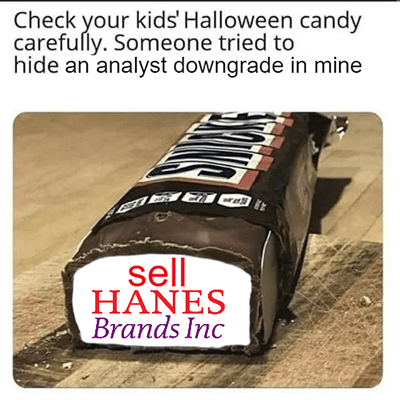 Another lovely image. Thanks for that, Great Stuff.

The reason? Debt — and lots of it. I mean, you don’t build an underwear empire without a little overleveraging, right? No? Alright then. According to Wells Fargo Analyst Ike Boruchow:

These challenges are likely to push shares lower over the medium term, as numbers likely continue to come down.

Lots of “likely” from Mr. Ike-ly over here.

Frankly I’m more concerned by the fact that Wells Fargo also pointed to a “deteriorating macro backdrop” for Hanesbrands to navigate, which is understandable when everyone and their mother is blaming the same macro backdrop for whatever problems they’re facing. Inflation be like that, yo.

Personally, I would have thought underwear sales would be recession-proof. Now I just want to know which one of you is foregoing spending on underwear … so my nose and I can stay far away. (No offense.)

Going: FoxConn Does A Barrel Roll 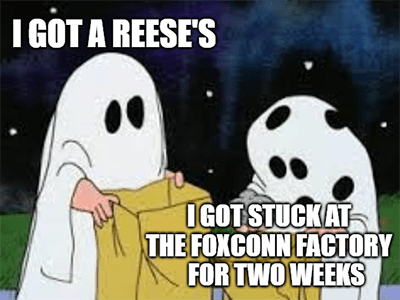 It didn’t save them from destruction … but hey, it was worth a shot.

Reports indicate that famous (infamous?) iPhone manufacturer Foxconn is struggling to contain a COVID outbreak at its facilities. According to said reports, workers have “faced restrictions on their movement” for almost two weeks.

As for how much workers’ movements were restricted due to China’s zero-COVID policy … I’d reckon “completely.” Like, no movement whatsoever. And if you don’t believe me, Disney and Don Henley will have more on that topic in a sec.

Analysts estimate that Foxconn’s November output could fall 30% due to the outbreak. Other analysts are speculating that this is the reason why Apple (Nasdaq: AAPL) lengthened delivery times for the iPhone 14 Pro from 24 days to 32 days.

Thing is, it’s not just Foxconn that’s stuck in the crosshairs of China’s zero-COVID policy. Literally anyone with exposure to manufacturing in China faces the same risks. China’s still not messing around with lockdowns … and it’s having a serious impact on the country’s factory output.

Welp, as of October, China’s reading has come below 50 for 6 out of 10 months so far this year.

That’s sustained business contraction. That’s a whole lot of companies like Foxconn facing outbreaks and locking down till it’s all clear.

Wall Street might only care about the number of iPhones making it out of China, but things aren’t looking so hot right now at the factory level for anyone, let alone businesses with production in China.

And on that note… 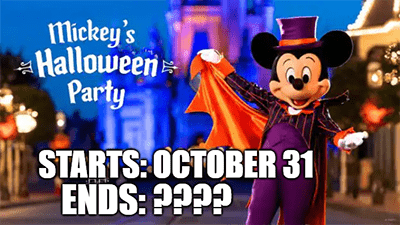 On a dark Chinese highway, COVID wind in my hair … warm smell of funnel cakes, rising up through the air…

Welcome to the Shanghai Disneyland. Such a lovely place, COVID in your face…

Plenty of room at the Shanghai Disneyland. You can find us here, till our testing clears…

C’mon, Great Stuff, it’s been a long weekend, and I hate the freaking Eagles.

Think you had a long weekend? Try getting stuck on It’s A Small World … for hours. Or sitting through another parade in the Park That Shalt Not Close … or maybe try reading through the park map (again).

Shanghai Disney is closed due to a COVID outbreak, whether you like it or not — and whether you’re trapped inside the park or not:

Posting on Chinese social media site WeChat, the Shanghai government said the park was barring people from entering and those inside could only leave once they had returned a negative test result.

A human-trap built by a Mouse? And here I thought Disney had already figured out every way to milk its guests’ wallets dry. Why not just lock ‘em in? You’re gonna buy that $12 funnel cake eventually…

There’s still no date given for when Shanghai Disney Resort will reopen … but I’m gonna hazard a guess that it’s when everyone tests negative. Like I just said: China’s zero-COVID policy doesn’t leave a whole lot of wiggle room.

I mean, everyone’s trapped, guests and cast members alike. So … is it a good or bad thing that Disney’s keeping the rides running? How many times are you really going to get on the COVID-go-round?

Which leads us to the age-old question: Would you rather get locked down in Disney or a Foxconn factory? It’s might not be as easy a question as you’d think…

Ventilators on the ceiling. Old people on ice … and she said: “We are all just prisoners here, of Xi Jinping’s device.”

And on that, we turn the conversation over to you. What do you think will come out of the Fed meeting this week? Do you have strong feelings toward Hanesbrands? Have you ever been held against your will at a Disney park? (Happiest place on Earth, my rear end…) Does anybody really hate the Eagles?

Whatever you want to rant and rave about, we want to hear it!

Strut your stuff and share your thoughts in the inbox below. And if you ever have a stock or investing idea you’d like to see Great Stuff cover, let us know at: [email protected]

And if you have that burning yearning that only more Great Stuff can satisfy, you should check out our deets here: